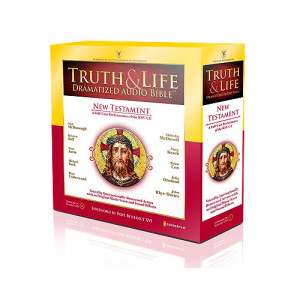 The Truth and Life Bible – Dramatized by over 70 actors

A new audio version of the New Testament dramatized by numerous celebrities is being heralded as a “significant” contribution to modern evangelizing and for sparking a renewed interest in the gripping narrative of Scripture. The audio series – which has the support of a Vatican imprimatur – features over 70 actors such as John Rhys-Davies, Neil McDonough, Julia Ormand and Kristen Bell.The Truth & Life Dramatized Audio Bible New Testament  is comprised of 18 CDs, or 22 hours of audio.

British actor John Rhys-Davies – perhaps known best for his role as the dwarf Gimli in the blockbuster Lord of the Rings trilogy – served as narrator of the series.
In a phone interview from his home in New Zealand, he praised the audio Bible for being “extremely well done.”