Stories From the Heart 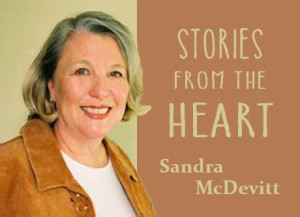 Stories from the Heart – with Sandra McDevitt

Sandra has been producing Catholic radio since 1992, beginning with “The Catholic Broadcast,” the first Catholic program to air in the Ann Arbor area. EWTN Radio ran the show from 1998-2002. She is a graduate of Concordia University with a degree in Human Resources and English. She and her husband John opened St. Michael’s Academy in 1990 which grew into the Spiritus Sanctus Academies. Sandra wrote numerous articles on Catholic culture for, “Credo,” a Catholic newspaper which served southeastern Michigan. Currently she is working on, “Moments in Catholic History,” written vignettes into our Catholic past. Sandra is the proud mother of five children and three grandchildren.